Riazantsev played in aggressive style by sacrificing first a pawn and then a piece in order to chase Black's king. Karjakin was however able to walk his monarch across, and then up the board, and his king eventually became a powerful piece. A fascinating tussle, and yet another entertaining display from Riazantsev.

Dmitry Jakovenko was involved in a double-edged struggle against Motylev who provoked some complications that proved to be unsound for him.

Sergei Rublevsky and Ivan Sokolov had a lively line in the Scotch Mieses where Sokolov was able to advance his d-pawn until it cost the Russian a piece.

Jakovenko must be happy about his situation, but Karjakin probably still has aspirations about winning the tournament.

With three rounds to go the eventual winner will almost certainly come from the leading three players. 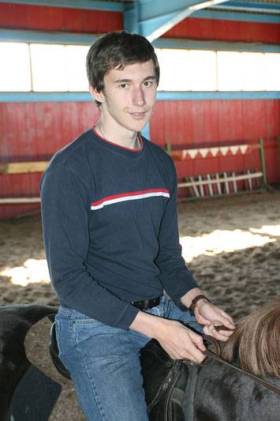 A rough ride today, but he finished on top @ official site