Thirty-five-year-old Topalov is also the higher rated of the two but historically doesn't have a particularly promising score against Anand. However in Sofia they have achieved an even score in six encounters (two wins each) at various time limits. Here are the results of their individual encounters where forty-year-old Anand has a clear edge. Their first meeting was in 1993 and since then Anand has a plus score in eight of the intervening years, Topalov only in three.

The difference in their present ELO rating is 18 points which points to a 53% score for the higher rated player, whereas a 25 point difference (in their virtual ratings) means that Topalov should expect 54%.

Anand had some problems to get to the Bulgarian capital due to the widespread grounding of European flights due to the presence of volcanic ash in the atmosphere. So he had to undertake a 40-hour drive from Frankfurt! He requested a three day delay, but was awarded only one (better than nothing, but you can understand the organizers not wanting to waste the first week-end). So the match begins on Saturday the 24th of April rather than today.

Here is the first of our video reports:

Topalov will have White in the first of the twelve classical games, starting tomorrow on the 24th of April at 5pm. If it's 6-6 at the end of these games there will be a rapidplay tie-break.

I'll be taking a good look at the games, so expect my report, with annotations to the game, tomorrow night. 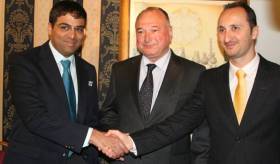 All smiles before the battle!
© Europe echecs.

Which player will take the lion's share of the 2 million Euros prize money?