Anand plays the Grünfeld for the second time in the match and with a happier outcome than in game 1.

His move order was unusual and an unprepared Topalov didn't get anything out of the opening. Later in the endgame the Bulgarian could claim a pull, but nothing that ever seemed to put black in danger.

There are two games remaining with the score all-square at 5-5. 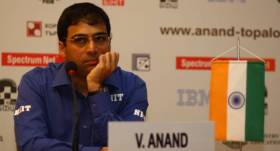 Our World Champion videos are definitely worth watching!

You may be wondering who would be favourite if the match went to a play-off. Look at the following table:

It seems that these two players are evenly matched at the longer time limits of Classical chess, but when it comes to shorter time limits Anand has been dominant in previous meetings.

With the distinct possibility that the match will be tied at six apiece, and consequently the title being decided by rapidplay play-offs, this is worth bearing in mind. 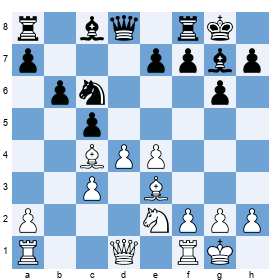 A rare and somewhat provocative move.

Topalov sticks to his thematic plan. Taking the pawn with 11.dxc5 is recommended by some, based on an old game and analysis. After 11...♕c7 12.♘d4 ♘e5 13.♗e2 Portisch,L-Ftacnik,L Wijk aan Zee 1985, led to a White advantage after 13...♗b7 (as Black didn't get enough for his pawn). It's not really topalov's style to grab such pawns but in any case he probeably decided that Anand must have had an improvement prepared, for example 13...bxc5!? (although Simic and then Sakaev still prefer White slightly following 14.♘b5 ♕c6 15.♕d5 ♕xd5 16.exd5 a6 17.♘a3).

Anand develops rapidly, as opposed to what happened in round 1 when he lagged badly in that department.

White gains space in the centre, where he often retains the better chances in the early middlegame. Black relies on his queenside majority to offer him counterchances especially later on if White's centre is successfully neutralized.

Anand takes the opportunity to nibble at White's centre.

After 21...♗xd5 (apart from the tempting check on c8) White has 22.♕d2 when he will regain the piece with some pressure. The passed d-pawn will then play an important role. 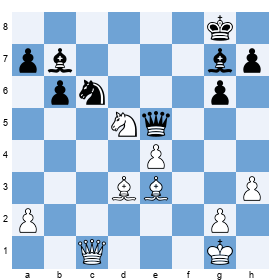 After the move played in the game, White's knight is well-posted on d5 but otherwise Topalov doesn't seem to have any particular pressure on Black's position. Anand will no doubt aim to blockade the e-pawn leaving White with few attacking options.

The most complicated, as slow play offers nothing.

Now Anand sets about blockading the d-pawn. Two bishops are generally superior in open positions to bishop and knight, but if Black can maintain a grip on d6 then he would hope to have good practical chances to hold.

It seems odd that the now that the knight has found the blockading square it moves away! However, Anand has an alternative piece disposition in mind. 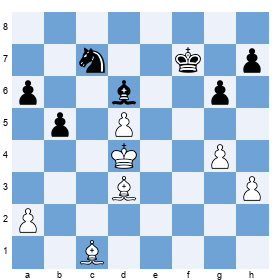 The pawns are placed on light-squares (the opposite-colour scheme to his bishop) in order that Black can blockade across the board. For example, White lacks any sort of entry route on the queenside for his king.

Topalov fixes the black pawns on light squares where they may be vulnerable to attack by White's light-squared bishop, if that is, Black's king stays in the centre. If Black's king then goes to the right-hand side of the board (to cover them) then Topalov will angle to invade in the centre, perhaps including a timely exchange of dark-squared bishops.

Not wanting to stay totally passive.

Forcing the exchange of bishops and thus diminishing White's pressure. 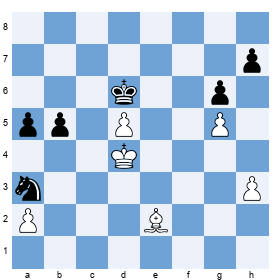 The d5-pawn falls and the draw is assured.

White puts his bishop on e8 and Black cannot make any progress despite having an extra pawn. 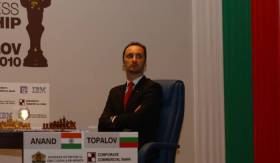 Ready and waiting for any opportunities that come his way. @ official site.