If either player obtains 6.5 or more over the twelve scheduled games they will win the match and thus be crowned as World Champion.

Our videos are regularly updated, so keep looking!

In the second match game Anand tried 10.♗d2 and went on to win although it was not evident that White achieved any opening advantage.

Apart from sacrificing a pawn in the opening, Anand cedes the bishop pair but has well placed minor pieces and a lead in development in compensation. 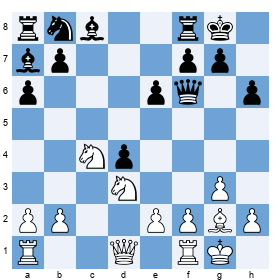 A surprising square as there is always the risk of the counter ...b7-b5 becoming dangerous.

Topalov aims for good piece deployment and is willing to return the pawn.

Again the Bulgarian shows his preference for open piece play. An alternative that comes into consideration is 14...♗d7 15.♘d6 ♘e5, but the position remains murky after 16.♕a5.

White has established material 'equality' but the slightly unusual scenario of 'two knights versus two bishops' has arisen. The bishops are not bad, but the knights seem to have enough good squares to keep them in check, especially as Black's slightly inferior pawn structure (isolated queen's pawn with no attack) doesn't offer him any pawn levers.

Black's bishops could potentially give him an advantage so Anand is careful to maintain control of the c-file.

Now the knights and bishops chase each other around the board for a while! 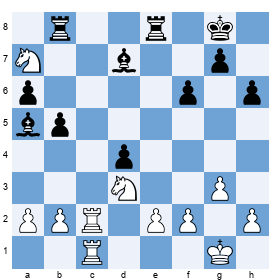 What a strange dance! Knights are not particularly happy on the rim but from here it is heading for the influential square c6.

Anand has finally been able to force the exchange of one pair of minor pieces (♘-c5 and ♘xb6 are threatened), reducing the chances for Black to seize control.

Otherwise if White were able to play b3-b4 he would have a nice bind, so Topalov finds an active solution.

The point. White's first rank is weak so he cannot do anything with his extra pawn. Incidentally the threat is ...♖xc6.

Gamely avoiding the repetition, but a draw is on the cards anyway.

Releasing his king from any potential mating tricks. With only pawns remaining on one wing the result is now inevitable.

My impression is that Topalov had no particular problems here and his active defence will have benefitted his confidence after a couple of earlier losses in the Catalan.

The onus is now on Anand to find something more testing as he'll be aiming to win at least one more White, just in case something goes wrong in one game as Black.

The next game will be on Monday the 3rd of May. Will it be another Slav?