The end of that dramatic last round rook ending demonstrates how close Azerbaijan were to not winning the title. 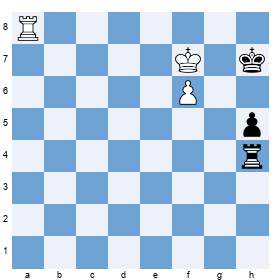 The fatal error for Stellwagen and for the Russian team (!) who would have won the event if the young Dutchman could have held.

Here are the rankings of the top teams

Azerbaijan (Radjabov, Gashimov, Guseinov, Mamedyarov, Mamedov) would have only been second on tie-break if they had only drawn their match against the Netherlands.

Ukraine without Ivanchuk (Eljanov, Volokitin, Efimenko, Drozdovskij, Kryvoruchko) scored the most board points and so edged out Armenia for the bronze medal. 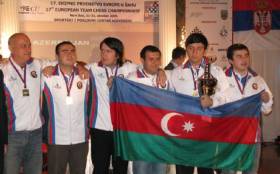 The Azerbaijan team with their Georgian coach.
© official site.

One aspect of their success was that all five players in the Azerbaijani team managed to win a game with the black pieces.

Here is Gashimov's, a game that one could entitle 'Gashimov yet again excites attention in the Modern Benoni!'. He is definitely the main flag bearer of this long-time unfashionable opening.

This is generally considered to be the safest way of playing Black's position.

White is able to snatch this pawn but drops slightly behind in development. The big question is: Can Black generate enough play for his investment? 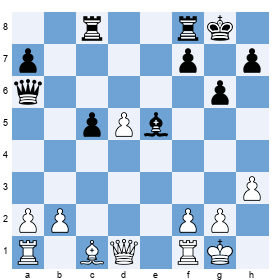 White has an extra pawn, but just as in the Benko Gambit Black's activity yields long-term pressure.

As passively consolidating won't be easy, Meier wants to use his passed d-pawn to seize the initiative. 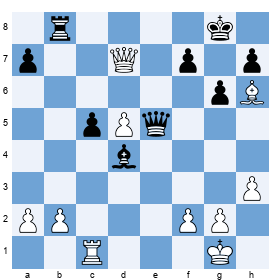 It's again interesting to note that Black isn't in a hurry to capture the b-pawn, indeed he never quite gets round to it! Instead he is more concerned with improving his pieces and taking care of the more important d-pawn.

Black threatens to consolidate his back rank with ...♖g8, so White must do something drastic to avoid losing his bishop.

A useful waiting move, whether or not White decides to exchange queens.

White may have the better pawns, but Black is very active. 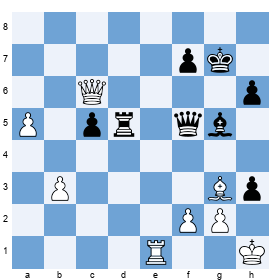 A fighting game which may encourage others to play the dynamic Modern Benoni.

Gashimov and Mamedyarov had identical scores, +3=2-0 with White, and +1=3-0 as Black. Mamdeyarov curiously played the first five rounds with White and the final four with Black. Whether by design or accident it seemed to work for him!

Creating some pressure thus obliging White to make a decision.

Some would be tempted by 7...♗xc3+ 8.bxc3 ♘f6, but the dark-squared bishop will be missed and White's pawns may not turn out to be that weak.

Macieja enters a forcing line in order to take a lead in development.

White's pieces are slightly more active, but there isn't much for them to get their teeth into.

Pressure against the c6-square, but Mamedyarov now neutralizes this at the cost of the bishop pair. 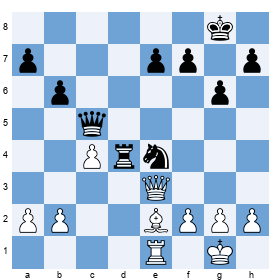 Black seems to have achieved a fully satisfactory game. The standard superiority of the bishop against knight (in an open bishop, with opposing majorities) is far from evident here.

I'm not sure if this is objectively stronger than 24...f5=, but the ! is for surprise value!

Mamedyarov intends to reorganize his pieces including placing his queen on d4.

Pavel Eljanov from the Ukraine obtained the highest overall performance (2823). Whereas Morozevich and Gashimov were the two other players to have obtained 2800+ results.

Here is one of Eljanov's games.

With White's rather cautious development Black has no problem to take a major stake in the centre.

After 9.♘b3 ♗e7 10.cxd5 ♘xd5, Black avoids having an isolated pawn, and his position will be fine if he can find a reasonable solution for his light-squared bishop.

However there is nothing wrong with playing a type of Tarrasch defence e.g. 9.cxd5 exd5 10.♘b3 ♗b6 11.♘bd4 ♖e8 12.b3 ♗g4, as in Burmakin,V-Nikolenko,O St.Petersburg 2004, when Black's active piece deployment compensates for any potential structural inferiority.

A option that looks quite controversial. White cedes his dark-squared bishop and then puts his pawns on light squares! However if, with a blocked centre, he is given the time to then place a knight on the blockading d3-square he would probably be happy enough. So Eljanov prefers to open the game for the bishop pair.

Fixing the queenside with a gain of time.

Space is important and the knight must be shifted.

Unbalanced pawn structures often suit bishops on an open board, but here matters are fairly 'unclear' as Black's majority is fairly static and his bishops have only limited scope.

Provoking White to commit himself.

Papaioannou doesn't want his opponent to blockade the dark squares.

It's noticeable how often the elite play for full deployment and harmony rather than snatching a shaky pawn. However, that being written, 25...♕xd6 is plausible despite looking slightly precarious: 26.g4 g6 27.gxf5 gxf5 28.♖g1 h6! and Black holds firm.

White's pieces are running out of useful things to do and the d-pawn may come under attack, so time for action!

A careful choice as this time 34...♖xd6?! is rather dangerous due to 35.♕e5! with awkward threats.

More testing than the solid 35...♖f8 which however wasn't bad.

Seeking complications (just before move forty!) is often the best practical chance in those cases when slow play will just highlight a board full of loose (in this case white) pawns.

Giving Black a fortieth move with plenty to think about!

Also after 41.f7+ ♔g7 42.fxe8♕ ♗xe8 Black will regain the rook and be objectively better, but with the d-pawn still on the board White has practical chances.

The connected passed pawns are an important asset, but I'm not convinced that they are yet a decisive advantage. 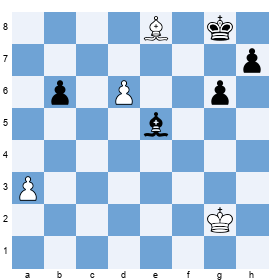 If you find something better for Black I will be interested to hear from you!

The Women's event came down to a two-horse race between Russia (+8=0-1) and Georgia (+7=2-0) the former getting the title on game points 26 to 24. Ukraine came a distant third just pipping the surprising Azerbaijani team (20th seed) on the second tie-break. 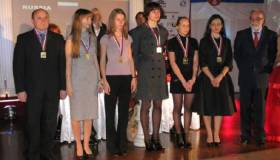