Shanava,K-Bacrot,E 16th Neckar open 2012, saw a modest variation of the Giuoco Piano with 6.Nbd2, Bacrot answered with his pet line 6....d5 and they reached the diagram position after 9.h3: 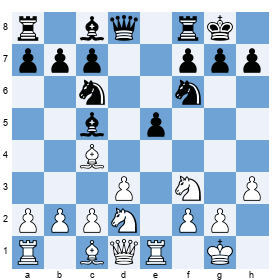 Here the Frenchman played 9...a6, which he had already tested against Movsesian in Rogaska Slatina 2011, instead of the 9...Bd6 he had previously tried in Radjabov,T-Bacrot,E from Khanty-Mansiysk 2011. Shanava introduced the most natural novelty 10.Nxe5 (instead of Movsesian's 10.a3) and to my surprise Bacrot immediately erred with 10...Bxf2+ and lost quickly.

The obvious reason for Black's loss in the game was his unjustified attempt to complicate matters by any means, when he would have been fine after 10...Qd4. So, despite disastrous statistics in this line I expect more attempts to prove that Black's position is playable.

Go to ChessPublishing to see more of the very latest King Pawn theory!