The seventh round played on the 26th of July ended as follows.

Vachier-Lagrave maintained slight pressure, but just at the point where he finally won a pawn he acquiesed to a draw as he was faced with his opponent's fortress with opposite bishops.

Maxim Rodshtein had a promising position as his knight was superior to Howell's bishop with the centre staying closed. The Englishman however knuckled down and held the draw.

Negi generated a strong-looking attack and Andreikin had to defend very carefully to fend off the Indian's threats.

Caruana-Giri was one of those Catalans where Black has a slight space disadvantage but no weaknesses. Giri was able to gradually equalize.

The all Asian struggle So-Nguyen Ngoc Truong Son was the sharpest game of all. The Vietnamese player won a pawn with a neat combination, but So didn't panic and was able to create complications. At the end of the tactical mêlée a draw was agreed as the Phillipino wizard was about to regain his material.

The Italian Fabiano Caruana still leads, but he will surely need to win at least one more game (if he is to be sure of the title) as he is only half-a-point ahead of five players. 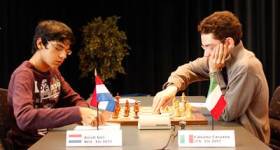 Only a draw with White today for the leader @ official site