Bologan kept a small space pull from a Petroff right into the endgame. The win came in a long bishop ending where my impression is that Motylev was holding his own, but then lost patience with the Moldovan's endless grinding. Last year's tournament winner let himself be tempted by the prospect of counterplay, but Bologan's d-pawn was too fast.

A sharp line of the French Winawer led to double-edged play, where at one point Emil Sutovsky avoided a repetition. Unfortunately for him, winning the exchange didn't help his case as Karjakin's bishop and passed pawns were too strong for the rook.

Ivan Sokolov grabbed a pawn and then was able to navigate the complications by simplifying to a double-bishop endgame a pawn up. Even this was complex as Naiditsch created a dangerous-looking passed pawn but the Bosnian kept everything under control.

Dmitry Jakovenko tried the well-known queenless middlegame variation against Rublevsky's pet Queen's Gambit Accepted, but his fellow Russian was too solid and despite his best efforts he made no real progress. 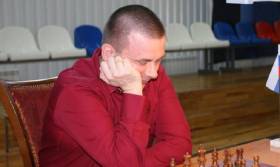 Raizantsev has been a revelation to me in this event as his games are so exciting. Here, yet again, he sought wild complications in his frantic attempts to lead his opponent astray. Another great fight that led to perpetual check.

Nikita Vitiugov offered a draw quite early, but presumably he didn't like his position that much in a King's Indian Sämisch where both players had castled long!

Karjakin was gaining 14 rating points before this event and I estimate he won a further 7.3 points here. So his next rating should be about 2760, good enough to be about 9th in the World.

After eight rounds Jakovenko was 1.5 points ahead of Bologan. It's amazing how things can change so quickly!

This reminds me of a story that a fellow GM Tony Kosten told me:

In his youth, he was 1.5 points behind a (slightly) lower-rated friend of his (Peter Large) with four rounds to go. Tony rather daringly bet Peter that he would finish ahead of him, and after three rounds he had won his bet with a game to spare! (think about it... Tony won his three games, Peter lost all three).

You may also like to investigate the following site Chesspro It gives plenty of information, but it's in Russian!