There were two decisive results today.

In the battle between the two most senior players, Victor Bologan took on Ivan Sokolov in an offbeat line of the Spanish and after some heavy manoeuvring the Bosnian had his strong knight undermined.

In this game Sokolov sacrificed a pawn for 'good blockading pieces', but it didn't look to be quite enough.

Riazantsev gradually equalized in the French and then outplayed Rublevsky in a complicated queen and minor piece pseudo-ending, by successfully combining defence with attack.

Last year the winning score was 7/11 (Alexander Motylev alone), which will be a useful target for the players.

So if a plausible winning score involves three wins and eight draws, then it's not necessary to win any games with Black, but it certainly helps! 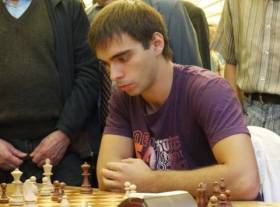 The best possible start for Riazantsev.

The second round will start tomorrow morning: 10am London or 11am Paris time.