Nowadays the option of using computers and the internet is taken up my a growing number of chess fans.

For chess software the name that immediately comes to mind is Chessbase.

I've used Chessbase 9 for many years but now No.10 is out, should I update I wonder? If you are thinking of revamping your analysis engines both Fritz 12 and Rybka 4 are available. I'm not sure it's really necessary to get both, but having one powerful engine is recommended if you want to save the hard work of analyzing everything out yourself!

Their DVDs offer a wide-range of possibilities. Here are three recent ones: Shirov on the Advanced Caro-Kann, Ftacnik sets out 1.d4 A classical repertoire for White and Müller is in his element with Chess Endgames 5

Since 1984 the Dutch team behind the New in Chess Yearbooks (despite the name they are actually 'quarterlies' as there are four volumes per year) have been bringing out regular articles on opening theory. 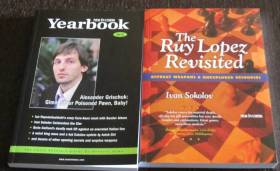 I like these because the fact that apart from giving the low-down on the latest trends, they always give a selection of background games. So it's relatively straightforward to start playing a new variation from scratch after reading a survey in a Yearbook.

As you may have worked out from the logo, I write for them! I specialize in book reviews on openings where I go into greater detail and point out the positive and negative aspects of four or five works each time.

In recent years NIC have been coming out with their own books, for example...

...both of which I liked and gave good reviews! Believe it or not!

In England for many years Batsford were the dominating force. However they have lost ground in the last decade, due in part to upheavels in the corporate sector above their heads and beyond their control.

They are now a subsidiary of Anova books who seem to have many other preoccupations rather than publicizing a minor part of their operation.

However they do still come up with some interesting material and I could mention two of their newer volumes whose titles make me want to have a closer look:

Critical Moments in Chess by Paata Gaprindishvili and Kasparov: How his Predecesssors Misled him by Tibor Karolyi.

It's a long time since this Serbian based outfit revolutionized chess preparation with their high-level analyses. In the old days (starting in 1966!) Informator was the main way for strong players to get their opening ideas and for them to prepare against other high-ranking opposition.

These books (and a DVD equivalent) still appear regularly (three times a year) but the appeal has been tempered by the easy access to other theoretical input. The style has changed in the Informators and number 107 has just been made available (and I'm not yet used to the re-jigged format), but of course it's still full of great novelties.

I would only recommend this series to serious, and theoretically-minded folk, as analysis is emphasized rather than explanation. 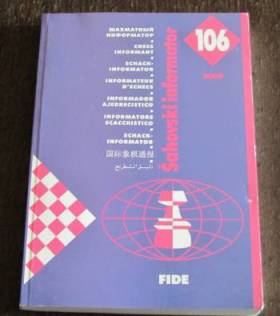