Quality and Gambit are both very active in coming out with some new ideas in their publications, and I've mentioned some of their best new offerings below. I'll be continuing this theme tomorrow with some insight into what the other main publishing houses are coming up with.

Here are some of their new books that caught my eye over the last few months.

Their 'Grandmaster repertoire' series (an excellent series of books written by top players with a serious readership in mind) is expanding fast, the latest being The Caro-Kann by Lars Shandorff. His earlier Quality work (Playing the Queen's Gambit) offered an aggressive series of systems for White after 1.d4 d5. Here he concentrates his attention on laying out a repertoire for Black in the Caro-Kann.

Other works in this series that really need mentioning are Boris Avrukh's 1.d4 Volume Two where his g2-g3 based repertoire is completed. Volume one covered 1...d5 and this second tome covers 1...Nf6, 1...f5 and minor lines.

Marin hasn't been lazy either coming out with The English opening, Volume One.

The Quality team have put together some great ideas, and these books tend to be the best at the moment for top-of-the-range players who are already quite experienced.

Milos Pavlovic is the author behind The Cutting Edge 1 a White open-Sicilian repertoire against the Sicilian.

I like his mix of sounds positional ideas in aggressive lines spiced up with plenty of fascinating sacrifices. There are reams of original analyses herein but the book is surprisingly thin. Two reasons: He sticks to main and critical lines (i.e. what people play rather than what people used to play) and the Najdorf will be coming in Volume 2.

The titles, and for that matter the splitting of the material into various volumes, is a slightly complicated process for the uninitiated, but the books are all... without exception... just great!

Another Quality book that some might find interesting (but geared to a lower range of players) is the Alterman Gambit Guide. He is looking at White playing a variety of lines based on thinking in a gambit frame-of-mind.

There are many classical games illustrating where Black goes wrong as well as a reasonable number of modern ideas including those he has tested himself.

I'll be using this (as Black!) to see what some of my future opponents may have up their sleeves!

It's less high-brow than the other Quality books that I've mentioned above and will probably best suit those average folk who want fun games and are willing to take risks.

Getting away from openings, Boost Your chess 1: The Fundamentals by Arthur Yusupov would make a good self-training guide for lower-ranking players. Who better than GM Yusupov to help you improve?

Some of this year's publications from Gambit.

I haven't seen it yet but I'm excited about Nunn's Chess Endings, Volume 1 written of course by Dr. John Nunn. According to what I've read there is more to this two-volume series than what normal endgame books have to offer, so this is a must for me, and probably also for all endgame lovers and practical players wanting to improve that part of their game.

Gambit are now actively aiming at explanatory opening monographs and are getting away from some of their earlier works that were stuffed full of game references but where the author didn't explain what was going on very well.

Understanding the Marshall Attack strikes a good balance between detail and reasoning and David Vigorito has done his usual diligent job.

One of the most original series of recent years Mastering the Chess openings comes to a close with Volume 4 which is far more than just a few rare openings. John Watson gives the reader a whole panoply of practical advice and goes far beyong just explaining some opening ideas.

In many ways this is the most ground-breaking of the whole series. Fundamental Chess Openings is set at a lower level for those who want the moves explained without being distracted by reams of Game references. 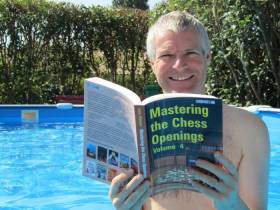 A hard day's work near the office!

One for those who like their opening material to be relatively condensed would be A killer chess opening repertoire by Aaron Summerscale and Sverre Johnsen. Here the title is straight to the point.

This one is for the lower echelons who don't like their opening preparation to be too involved.