As one can see its no surprise that Baden-Baden were able to win with the team list that they have!

They didn't even need Carlsen this season!

The German league is arguably the strongest of all because there are more teams, players and divisions involving titled players. Most of the leading players in the world play are involved and generally play at least some of the games. Another characteristic is that there are 16 teams and fifteen matches, more than any of the other top leagues. A long season that comes to a close in the spring each year.

In the following game from the final Bundesliga week-end Gashimov demonstrates that he still has faith in the Modern Benoni.

An interesting choice on Gashimov's part. The world's leading (regular) Modern Benoni player doesn't always go down the main lines as he prefers the practical approach of getting his opponent onto unfamiliar terrain. The chosen move is rare but has so far scored well in practise.

White's adventuring with ♘-b5 hasn't really got him very far, as Black hasn't needed to make any concessions.

The idea is to keep the queenside majority in check.

Black has active pieces and Nikolic now prefers not to play e2-e4 (to push the bishop back) as this would weaken the d3-square (where Black might be tempted to install a knight).

White has to retreat.

A psychological point: Gashimov points out to his opponent that it is he who is playing for a win!

This advance can sometimes be 'weakening' as White can at times use the d4-square. Here White's position is not sufficiently disposed for that and indeed lacks any really active play.

In order to gnaw away at White's kingside.

After 28.♘axb5 Black can always regain the pawn with 28...♖b8 29.♘d4 ♖xb4, but the general emphasis is definitely on the kingside.

White could have tried 29.f3!? ♕d7 30.♘axb5 hxg3 31.hxg3 ♘xg3 and matters are not that clear, but it's worth noting that White's king is the most vulnerable. 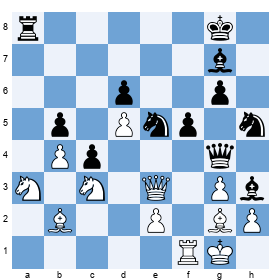 Creating some practical problems for White.

A case of the wrong knight!

Winning the exchange. The following ending is winning for Black.