After a hectic program over the last three days, eight of the players will have a rest day enabling them to prepare for their quarter-final opponents. The other eight can prepare for their journey home, including the former World Champion Anatoly Karpov. 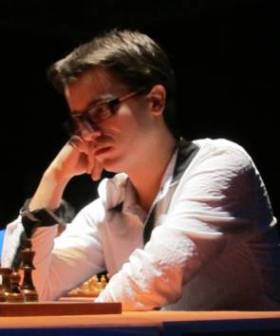 So the standings in Pool A after all seven rounds are as follows.

Judit Polgar made things difficult for herself. She threw away her game against Karpov in round 6 and had to defend a difficult position against Nguyen in the final round in order to keep ahead of Romain Edouard.

The top four will play in Thursday's quarter-final.

In Pool B Hammer has had a very mixed qualification, but was able to produce a nice technical win when it mattered against Pelletier in the final game, thus ensuring that he will advance further.

JV Hammer: a seventh round win saw him into the quarter-finals (chessanytime)

So the final standings are as follows:

As a reminder, the earlier results were as follows:

Nguyen will be in the quarter-finals (chessanytime)

You can choose between English and French. The English-language commentators being Glenn Flear (that is, yours truly!) and Javier Moreno.