Magnus Carlsen employed the double-edged Dragon, against which Nisipeanu played the popular Yugoslav Attack with a quick 0-0-0. Clearly White went astray as he placed his knight on the unfortunate a7-square where it had no future, and the Romanian was effectively playing a piece down. Resignation came early as Carlsen was about to launch a decisive attack along the first rank. 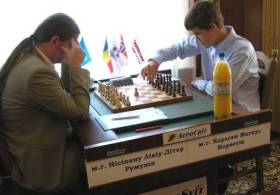 Carlsen about to play ...c5 against Nisipeanu.

Wang Yue maintained a slight space advantage in the symmetrical system where White fianchettoes against the Grünfeld. Radjabov however was able to keep his pieces sufficiently active and even won a pawn at the end, although Wang Yue could still bail out with a repetition.

Gelfand and Ponomariov have faced each other frequently in recent months, including their marathon match in the World Cup final. This time Ponomariov played the Ragozin system and after an early exchange of queens, both sides had isolated pawns in the centre. Ponomariov then developed in a way which provoked Gelfand to win a pawn, which he did, but in return the Ukrainian obtained some activity. However it wasn't really enough and Gelfand gradually took control.

Gelfand and Ponomariov in their World Cup epic last December.

The tournament has split into two halves with three players on plus scores and three trailing on less than 50%.

The subsequent rounds can be followed live at 1.30 pm (London), 2.30 pm (Paris) or 3.30 pm local time. The exception being the last round that will start two hours earlier.