In the Petroff, Wang Yue gave up a couple of pieces for a rook and pawns. He was probably counting on his eighth rank pressure to hold the balance but unfortunately his rook became trapped whereupon Carlsen had little difficulty in converting his advantage.

Topalov's play seemed listless as Anand emerged from the opening with a solid comfortable game. Indeed it was soon Topalov who had difficulties, as his king remained in the centre. The queen and rook pseudo-endgame proved to be lost for White as Anand's pieces were too active. 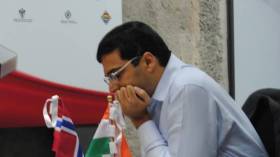 The World Champion was amongst today's winners 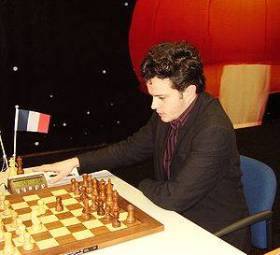 A technical win by Etienne

Gashimov seemed to lack ideas in an opening where the queens came off and the Frenchman simply pushed his a-pawn to generate queenside play. Most of the game then revolved around the question of whether or not Bacrot could make something of his queenside in the rook and bishop endgame. He ultimately won despite being down to his last pawn.

Here is the third round summary:

Here are the standings after the third round:

Today's three winners are ahead of the pack.

Here is a summary of previous rounds:

For those who like to follow the games, in Europe it means an early morning and in America a very short night!

where there is an option for English!