The seventh round of Blindfold chess was dramatic!

Naturally a bad start to the day for Carlsen who lost to Gashimov, whereas Ivanchuk drew.

So after the Blindfold of the afternoon, matters were all square at the top.

Grischuk catches Carlsen in the standings at this particular discpline. 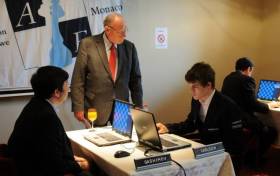 Gashimov winning in the blind play against Carlsen
© official site.

Ivanchuk's win over Grischuk confirmed his lead in both the Rapidplay and indeed the overall standings with Carlsen making his first draw of the whole tournament.

Karjakin scored the only double of the day over Ponomariov who after a good start is sinking in the standings. 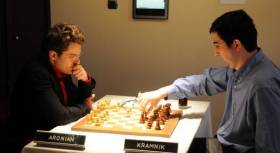 Aronian getting his revenge in the rapid play against Kramnik
© official site.