The strongest side were the defending champions Evry who were fielding four 2700+ GMs for the crucial match. However they were unable to outgun the Chalons team over the whole season and (after both teams had won their first ten matches) were obliged to beat their rivals in the crunch match.

Chalons however held the draw (despite being outrated on six boards from eight) and thus won the championship for the first time in their history. Svidler (Evry) beat Anish Giri (Chalons), but this was negated by Van Wely (Chalons) beating Gashimov (Evry) whereas the other six games were drawn.

There have been sixteen teams for many years playing at the highest level in France but this will change next season when the Top-16 will become the Top-12 and the event will switch to the round robin system.

At present, the sixteen are divided into two groups of eight, the top half of which qualify for the 'poule haute', whereas the bottom half play in the so-called 'poule basse'.

In the final 4-game long week-end, the teams in the 'poule haut' compete to decide the title and podium places, whereas the 'poule basse' typically involves a frantic fight to avoid relegation. 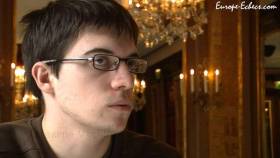 The traditionally high-placed teams struggled in the 2010 season. Many-time champions Clichy were outgunned by some ambitious up-and-coming teams and finished well off the pace in fifth place.

Cannes have finished in second place so often they are known as the 'eternal runners-up'. This year they didn't even make the top pool and had to content themselves with winning the lower pool, which at least ensures their participation next year.

Montpellier have been at this level for a generation but financial problems have left them with a reduced squad hence their predictable relegation to the second tier.

Evry, Chalons and Marseille have younger squads and the finance to enable them to afford competitive squads.

Here were their star players: 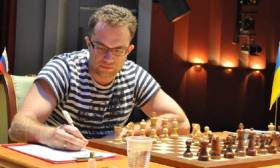 Eljanov has been in good form, but only made a disappointing 1.5/3 in the final week-end

Here is the final table for the top eight.

Metz beat Clichy in their individual encounter and therefore placed ahead of them in the table.

The second group of eight left only two teams happy with their lot.

Bischwiller were unable to compete due to serious financial problems.

The bottom six teams are relegated with two teams being promoted (Rueil-Malmaison and Lutèce, both essentially Paris-based) to next season's new-look TOP 12.