It's not over yet as the 7th China-Russia chess summit continues with a rapid match from the 11th to the 14th of August.

There is in fact a long history of the Russian team (and before them the Soviets) playing high level matches. In earlier years they frequently challenged Yugoslavia and there were even famous telex matches against the US and even England.

Naturally some of the USSR vs. the Rest of the World clashes were legendary.

In recent years they have found some worthy opponents in their neighbours the Chinese, who took the men's classical match after not even losing a round. The main damage was done in the second round where China overwhelmed the slightly higher-rated Russians 4.5-0.5.

The scores from the 7th Scheveningen (Classical chess) were as follows:

Rating-wise the teams were almost evenly matched, but the highest-ranked Russian duet under-perfomed, whereas the leading three chinese players were red hot. 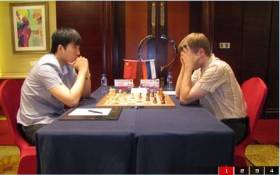 In the women's match the Russian squad helped the overall score:

In terms of performances Ju Wenjun obtained the best score and gained the most rating points.

The Russians were slightly higher-rated than the Chinese and only out-performed their expected score by a small margin.

Yinzhou can be found in North-Eastern China in Zhejiang province.