A sharp Caro-Kann advance seemed to go wrong very quickly for Inarkiev as a pin along the a5-e1 diagonal led to White losing a pawn. So Eljanov wins again with Black and retakes the lead.

Alekseev moves up to after gradually outplaying Akopian in a closed Spanish keeping the Armenian firmly at the bottom of the tournament.

There were three Spanishes today, apart from Akopian's downing the other two led to long endgames.

Ivanchuk was always a shade worse but was able to steer the game into a drawn rook ending despite being a pawn down.

Gashimov had a pull going into an opposite bishop ending, but never really looked like breaching Svidler's defences. Svidler now has six draws plus one accident and will be slightly frustrated not to have won any games yet. He will however be pleased that England won the Twenty20 World Cup in cricket, as he is an ardent supporter of Her Majesty's team in that so-British of sports!

Radjabov pushed long and hard but couldn't win, so that makes seven draws for him!

The rankings after seven rounds:

Five players are on Eljanov's heels. At the bottom Akopian is at risk of losing touch with the others. 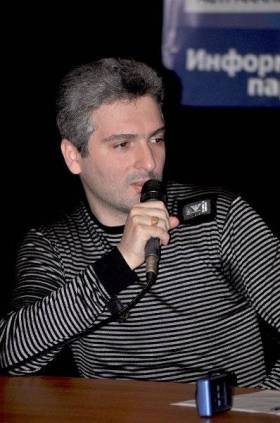 It's tough at the bottom. @ official site