In the mixed section, the strongest team on paper Economist SGSEU Saratov went on to win their 2nd round match by 4.5-1.5 to HMC Calden(21st seed). The second strongest outfit Ural Svedrdlovskay (also Russian) won with the same score against Rochade Eupen-Kelmis(22). In that particular match, on the fifth board, the upset of the day was produced FM Klein,F(2299) beating GM Dreev,A(2659). 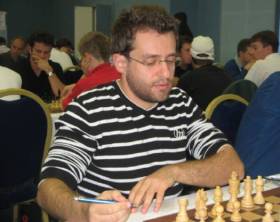 The third match, between Mika Yerevan lead by GM Aronian,L(2773) and Shsm-64 Moscow, was very tight where draws were made on all boards except for GM Sargissian,G winning quickly against GM Caruana,F who equalized and then fell for a devilish trap. 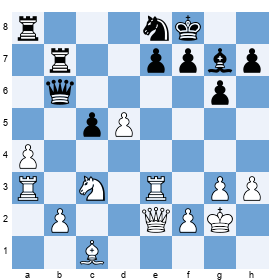 In this quiet line of the Benko Gambit Black tends to be very solid, and indeed 20...♘d6 would now be typical with equal chances as White is in no position to exploit his extra pawn.

Instead the young Italian trips himself up...

...and topples over very quickly...

This delightful coup de grace must have been overlooked by Caruana in his calculations. After 23...♕xb3 24.♕xe6+ ♔h8 25.♕f7 Black is mated!

So far 14 teams have won both their matches.

In the Women's cup, the match between Economist Sgseu Saratov-Spartak Vidnoe ended in a draw 2-2. First board IM Muzychuk,A beat IM Kosintseva,T but IM Lahno,K equalized the match on the fourth board by winning against IM Paehtz,E.

So far only Samaia Tbilisi have won their 2 matches.