The top encounter between Economist-Sgseu Saratov(1) and Novoborsky Sk(14), was a one-sided affair with Economist dominating 5-1. Much closer was the 2nd match, A.Dandzo Pgmb(11) against Ural Svedrdlovskaya(2) which ended all-square, 3-3.

The third match involved Sk Slovan Bratislava(26) against fourth seed Osg Baden Baden (led by GM Movsesian,S (2711) who so far has scored a modest 1.5 pts, whereas his team mates all have 100%!!) and the strong German team won convincingly 5-1. Bratislava's point being that of Ftacnik's, see the notable games section. 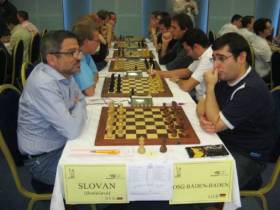 After round 3, Samaia Tbilisi retain their lead having drawn against Spartak Vidnoe 2-2. On the other hand Monte Carlo (seeded number 1) conceded another draw, this time against Economist-Sgseu Saratov(4).

GM Koneru,H winning on the first board against IM Muzychuk,A but this was balanced out by GM Socko,M losing to IM Paehtz,E. GM Socko,M is having a rough time in this women's cup losing both of her games with black (scoring 1/3 points so far). For more detailed information here is the link to the official site: