Today, on top board, we saw the clash between the leaders Economist-Sgseu Saratov(1) and the Israeli 13th seeds Beer-Sheva Chess Club. Economist won by 4-2. Next to them in the second match, Osg Baden Baden(4) were edged out by the Armenian team Mika Yerevan(7).

The third table featured two similar strength squads, SpbchFed Saint-Petersburg(8) and the highest-ranking Macedonian team Alkaloid Skopje(10), and ended in a win for the locals by 2.5-3.5pts. Svidler,P (2741) representing his home city beat Mamedyarov,S (2721) on board one, but lower down Skopje's Volokitin,A Guseinov,G and Stanojovski,Z all won (the latter being victorious against an opponent rated more than 100 points higher than him!). 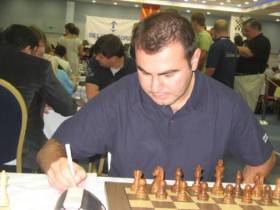 The encounter between the leaders in the Women's cup Samaia Tbilisi(3) and Economist Sgseu Saratov(4) led to a peaceful draw on all boards 2-2. The second match finished on the same score but in a different manner: IM Rajilich,I(2465) of Polonia Votum Wroclaw(9) defeated T-Com Podgorica(5)'s GM Hoang Thanh Trang(2501), but IM Kovaleskaya,E(2436) balanced the score by beating WGM Krupa,M(2219). 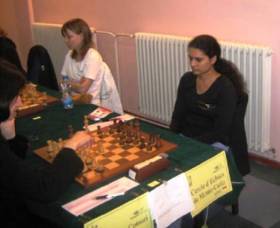 The big winners of the day were first seeds Cercle d'échecs de Monte Carlo by scoring 4 precious points against Radnicki Ridovci(tenth seeds). So now at the end of the day, with 3 matches to go, Monte Carlo has stolen the lead on the second tie-break ahead of Spartak Vidnoe and Samaia Tbilisi. More details informations on the official site: