In the penultimate round the top three matches finished with the narrowest possible decisive results. Economist Sgseu Saratov kept up their good form edging out Alkaloid Skopje 3.5-2.5 with fourth board Bu,X for Economist beating Guseinov,G in a King's Indian/Benoni. The other boards all being drawn.

In the second match Ural Svedrdlovskaya lost to Mika Yerevan (again by 2.5-3.5pts). On the first board Grischuk,A (Ural) sacrificed his queen against Aronian,L which was probably sufficient for a draw but no more, but then blundered and lost. Apparently at the end of that game the time situation was 0,31 seconds remaining for White and 1h20m for Aronian! I suspect that the Yerevan chess laboratory had anticipated Grischuk's reaction to Aronian's novelty deep into the game. 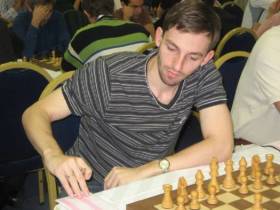 White insists on sacrificing a pawn.

This line has become very popular in the last few years. Black can hold onto his booty but will be vulnerable to attacks on all fronts as there is no stable shelter for Black's king. 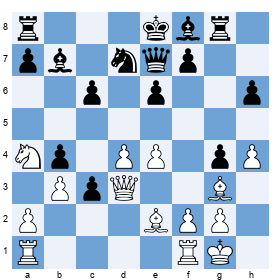 A novelty that enables Black, before committing himself, to consolidate his g-pawn. Instead in the afore-mentioned game Gelfand continued with 18...e5 19.♖ad1 ♗g7 20.d5 ♕d6 21.♗xg4 cxd5 22.exd5 0-0-0 but went down in the complications. 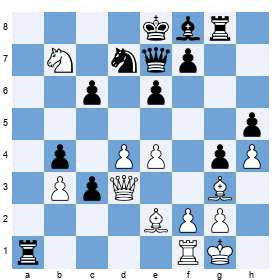 This fails to gain an advantage. Those interested in this variation should probably investigate 22.♖xa1 ♘xc5 23.dxc5 ♕xc5 24.♖d1 ♕e7 25.♗e5 when White has some play for his pawns. But is it enough? 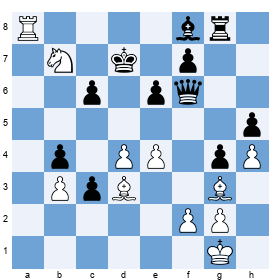 Snuffing out the attack with a neat counter-sacrifice.

On the third table SpbChFed Saint-Peterburg beat Osg Baden Baden 3.5-2.5pts with Bacrot,E losing on second board to Vitiugov,N.

At this point, three players have individual scores of 5.5/6pts including Zarka,A rated 1979!

The Leader board has Economist Sgseu Saratov at the top followed by four other teams.

In the Women's event, Spartak Vidnoe didn't give much away to T-Com Podgorica whilst trouncing them 3.5-0.5pts. Samaia Tbilisi met Radnicki Rudovci, but this was a closer affair with the Rumanian team finally winning 2.5-1.5 against their significantly higher-rated rivals. The third match Mika Yerevan-C. Monte Carlo was rather more peaceful, with draws on all boards. The best scorer at this point is Lahno,K who now has 5.5/6pts with a performance rating of 2772!!