Turkey is now one of the most active federations in Europe. They organize many strong events on a regular basis as they have the infrastructure to cater for vast numbers of people in their large capacity tourist-orientated hotel complexes. The hotels (often four, or even five stars) are made to make the visitor feel welcome, as in any decent holiday resort. Facilities include an outside swimming pool (noting that the temperature was still extremely pleasant for this time of the year!), sauna, hammam, table tennis etc....and on top of that free soft drinks, tea, coffee etc. That is not even mentioning the proximity of the sea!

All these distractions didn't deter keen chess players from doing their thing and you could see groups of people analyzing their post-mortems wherever you turned.

There was a fantastic atmosphere around the playing venue and the hotels were only a walking distance away. Of course it helped that there was a wide variety of food with all sorts of different dishes for every imaginable taste!! Didn't someone once say that a chess tournament marches on its stomach?

So ideal conditions for this important event which attracted around 2400 persons representing no less than 89 federations!

The playing hall for the older sections and the top boards of the younger groups was large and spacious, but a little more cramped for the lesser players in the under 12s and downwards.

Chess is now taken very seriously here as for the last five years it is being taught in the whole country starting in primary school, which means about 20 million potential stars! They have big ambitions especially in the women's arena, as you will notice when they organise yet another strong event in the near future.

Here are some of the happiest competitors... 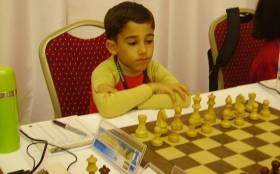 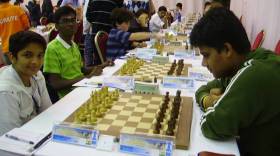 An all-indian top board duel.
© CAT 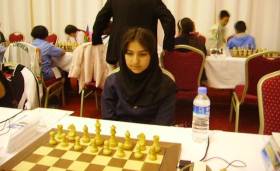 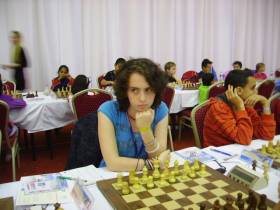