Both of these living legends, Boris Spassky and Victor Korchnoi, hail from Leningrad, but have a rather different attitude towards chess. Spassky is laid back and relaxed and not that bothered by playing, whereas Korchnoi is always highly competitive and very active in the chess scene.

One could naturally have anticipated that 78-year-old Korchnoi was favourite to take this match but Spassky (six years younger) showed that when pushed he can still play a reasonable game of chess.

Here are their personal records which demonstrate that Korchnoi has generally had an edge. His advantage would be even more evident if it weren't for the fact that in 1968 Spassky crucially won their match in the candidates final (4 wins to 1) and went on to become World Champion.

Spassky twice came from behind to tie the 2009 match as follows.

A score of 4-4 was something of a success for the inactive Spassky. However a younger (and more ambitious!) former World champion would probably have tried harder with White in the eighth game.

It turned out that in the sixth game Spassky almost threw the match away with a blunder. 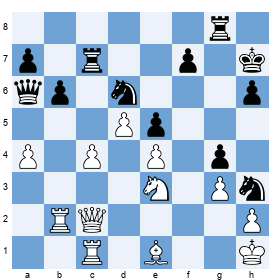 An imprecision that allows Black to free himself or, more exactly, preparation for the blunder that follows!

Now Black can get away with this.

However in the following game he managed to defend well and later pick off a pawn, thus equalizing the match.

White's central pawn couplet are known as 'hanging pawns' which tends to be considered as a double-edged structure. They can offer attacking chances (they cover several key squares, yield an advantage in space and have a lust to expand) but as they lack pawn support they can come under pressure. 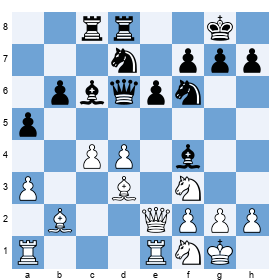 Retaining the dark-squared bishops for now leaves his opponent with no real targets.

Although 31...f6 is plausible it could lead to some weaknesses. In any case Spassky isn't afraid of simplification.

The exchange of the c-pawn for Black's e-pawn leaves White with an isolated d-pawn.

This move is often rather a nuisance as White's first rank can become a serious weakness.

Loosening, but what else?

The d-pawn falls. Clearly it would have been safer left on d5!

More details (in Russian!) on the official site