On the top boards fifteen of these players started the day on 3.5 points. The exceptions being the top board, where Jobava and Efimenko still had a perfect score, and Zoltan Almasi who was on three points but floated up to play the 199th seed Tamir Nabaty!

The unknown junior from Israel doesn't yet have a FIDE title, but presumably won't have to wait for long on this performance, despite today's loss!

Wins by Nisipeanu and Timofeev and a draw on the top board leaves the tournament with four leaders on 4.5/5. 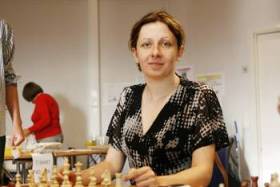 Leader Monika Socko drew with the Black pieces against third seed Anna Muzychuk. Boards two to four featured the other players who were within half-a-point of the Polish Grandmaster, whose husband is playing in the men's event. Before the round, twenty-five players had three points, seven 3.5 and just the one had 100%.

After five rounds, three women are now in the lead, Tatiana Kosintseva and Arakhamia-Grant joining Socko on 4.5/5.

The three nationalities at the top are a Russian, a Pole and a Scot (although Arakhamia was a Georgian at birth)!