Top seed Boris Gelfand finally made the difference at Blitz and for once was quicker than his opponent!

This result was arguably against the odds as in the recent World Blitz championships Ponomariov finished 6th and Gelfand 17th, and furthermore Ponomariov won both of their individual encounters.

In the first Blitz game apart from being slower on the clock, Ponomariov also had problems on the board and embarrasingly got his queen trapped whilst still being undeveloped.

The second game involved opposite-sides castling in a fairly sharp line of the Slav. This suited Ponomariov, in principle, who came out on top in the complications, but Gelfand looked as if he should have consolidated and won this one too.

In the third game a slight and enduring edge from a Queen's Gambit Accepted (better bishop, less-exposed king) enabled Gelfand to engineer a winning knight ending.

The fourth game was also quite sharp, but the Israeli had an ace up his sleeve in the form of his passed c-pawn which eventually won the day.

Gelfand had a bumpier ride than the previous winner. In the last World Cup in 2007, Gata Kamsky of the USA beat Shirov in the final and only required one play-off on the way to becoming champion (for the record, teenagers Karjakin and Carlsen were the losing semi-finalists).

If you are confused about the changing rates of play, here is an attempt at an explanation:

In the last of the matchs from this year's World Cup, neither player was able to make a difference at the regular time limit which we refer to as classical chess (90 minutes for the 40 first moves, followed by 30 minutes for the remainder of the game, with an increment of 30 seconds per move).

In those cases where the classical games do indeed finish 2-2, a match of four rapidplay games (25 minutes plus 10 seconds per move) is undertaken, as was the case here.

Then as matters were still unresolved (2-2 in the rapids) the players played a series of mini two-game Blitz (5 minutes plus 3 seconds per move) matchs until somebody could break the deadlock!

We have seen both of these players come through their previous rapid play-off matches with a good score.

Here are the player's overall record (including the final) in rapid chess in this year's World Cup.

Gelfand failed to overcome Vachier-Lagrave in four games and was required to beat the young Frenchman at Blitz (good practise for today!).

Ponomariov hadn't required Blitz games before, but did come back from being behind against Malakhov in the semi-final rapids.

As an overall 'game strategy', in both 'rapidplay' and Blitz, playing particularly quickly can put pressure on the opponent, but relying on 'instinct' in this manner (rather than 'taking one's time' to calculate) can lead to mistakes!

The first rapidplay game saw Ponomariov avoiding any theoretical discussions by playing the Reti opening (1.Nf3). Gelfand naturally reacted solidly and, after the exchange of three minor pieces, White only had the nominal advantage of bishop against knight. However as the pawn structures were stable this hardly benefitted White at all, and, once all the queenside pawns were exchanged, there was no point in flogging a dead horse any longer.

The Catalan was used by Gelfand in the second game. Black seemed to have more or less equalized and White's only positive asset was a superior structure. However Gelfand managed to probe away and the Ukrainian's pieces became discoordinated. Eventually Gelfand forced simplification into a winning knight endgame as Black's structure was shattered.

In the third game Ponomariov managed to find a trick that won a pawn. Then Gelfand wriggled as best as he could, but as the game advanced the extra material and time advantage seemed to give Ponomariov a readily convertable advantage. However Ponomariov's quicker pace eventually (one could say inevitably!) led to some imprecisions and Gelfand managed to snatch his pawn back. The endgame with Rook and Bishop against Rook and Knight perhaps still offered White a few practical chances but Gelfand seems to play very sensibly even with considerably less time than his opponent.

So the draw obliged Ponomariov to win with Black in the final rapid game, so he chose an unorthodox opening with features of the Modern Defence and the Benko Gambit. An early ...g5 was provocative but Gelfand stayed calm and just kept his pieces centralized, however Ponomariov managed to keep some tension and remain dynamic. Furthermore he unbalanced matters by giving the exchange for a couple of protected passed pawns. His bishop pair in the open position created difficult practical problems for time-limited Gelfand.

The most prudent option could have been giving back the exchange for an endgame that looked drawish to me. Instead Gelfand held onto the material but the pawns kept rolling and decided the game.

It's exciting but sometimes cruel to decide games on blitz, just like penalties at football.

This is how matchs have been decided in Khanty Mansiysk: 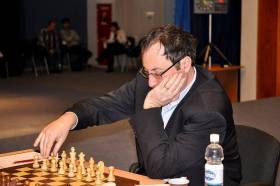 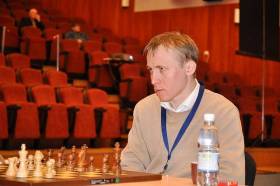 Ruslan Ponomariov: came back twice from the dead, but couldn't manage it a third time!
© official site