Boris Gelfand won convincingly today and so must have odds of something like 90% to be involved in the coveted final match which will be over four classical games rather than two.

This move order is used to avoid Petroff's defence (that arises after 2.♘f3 ♘f6) of which Gelfand is a great specialist.

Naming openings isn't always straightforward! This one started out as a 'Bishop's Opening' but transposed to a line of the Two Knights Defence, which in the case of the positional d2-d3, I call the 'Quiet Italian'!

The most ambitious. Black aims to open up lines for his pieces, at the risk of weakening his e-pawn.

A few months ago Karjakin played the more prudent 6...d6 against Radjabov but after 7.c3 then continued with 7...d5!? anyway. The justification for this tempo loss being that the d3-square can now become weak.

Obliging some sort of concession on the queenside.

The materialistic 10.♘xe5 ♘xb3 11.cxb3 ♖e8 12.♘c3 leaves White's pawns so corrupted the fact that he has an extra one is of little significance. Black has such comfortable development, as well as the far-superior structure, he may even be better.

Another point behind the early ...a5 (that is after the reply a2-a4) is the creation of this outpost. 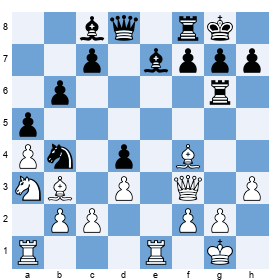 Now Gelfand trades his opponent's other bishop (and best defensive piece) when Black will have the more active set-up. Note in particular the position of White's knight stuck offside on a3.

Taking a pawn gives White only temporary pleasure, the rest of the game being quite depressing from his point of view.

This fails to Black's next move, but it's already hard to suggest a decent move for White. 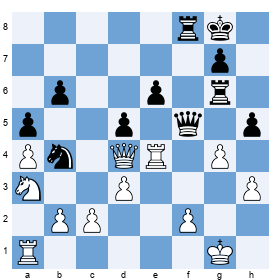 Karjakin's position is a shambles.

White saves his king by exchanging queens but the simplified position is hopeless.

In the other match, Ponomariov kept plugging away with the white pieces but Malakhov never looked in danger. A repetition in a double-bishop ending signalled the end of hostilities. The Chebanenko Slav was again used by Malakhov to great effect (see also his quarter-final win against Svidler) a sign that this system is a tough not to crack.