The Semi-Finals on Friday the 4th and Saturday the 5th saw two tight matches.

After four drawn games Gelfand was only able to make the difference in the blitz play-off. 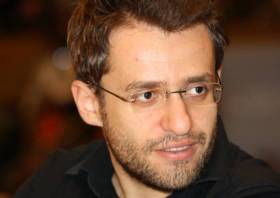 He seems to be making a habit of beating top class opposition in Blitz matches (as Vachier-Lagrave, Ponomariov and Vallejo Pons can testify!), as demonstrated both here and in Khanty Mansiysk at the end of last year.

Maybe Blitz isn't a younger person's game after all!