The battle for first place may be hotting up but it was the lowly Turkish side that created the big news by beating an Israeli side rated on average 160-odd points higher! What next?

The former World Junior Champion Ahmed Adly has a honorable 4.5/7 on top board for Egypt. 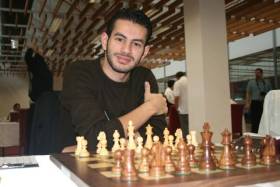 Ahmed Adly from Egypt, happy about his form
© official site

Bravo to the Turkish team who are continuing to battle away despite having a difficult time.

Sutovsky and Rodshtein both had their first losses and their opponents, Yilmaz and Esen, their first wins!

Brazil have been out of form so far but play Turkey tomorrow in the battle to avoid the wooden spoon.

Nakamura now has 5.5/6 and Onischuk 5.5/7, both of whom are now favourite to take their respective board prizes. Naturally this fact goes a long way to explaining why the US have been able to win six matches so far.

The USA are one match point ahead but have to face Armenia and Azerbaijan in the last two rounds. Russia have Egypt and Israel and must still fancy their chances. 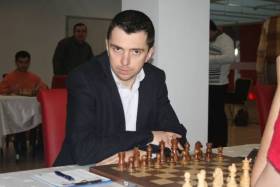 Alexander Onischuk is the best second board in Bursa
© official site