Ivanchuk has competed in all nineteen Melody Amber tournaments, but apart from winning the very first version in 1992 has had to wait eighteen years to get back to the top of the table!

Grischuk's win leaves him with 8/11 in the blindfold, a full one-and-a-half points ahead of his nearest rivals. 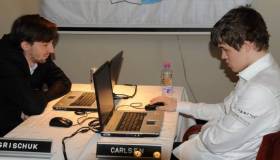 Both leaders won with White ensuring a tie for this year's rapidplay competition and the overall title.

The battle of the Ks! Karjakin-Kramnik
© official site.

Kramnik lost in the rapidplay but his win in the blindfold along with Grischuk's loss meant that he was able to scrape third place anyway.