Nigel Short was in his element in murky complications arising from an obscure line of the French Defence. He soon obtained a strong kingside presence in compensation for White's queenside majority. Later Black's kingside pawn phalanx won him the game where at the end Short won with rook (and strong pawns) against two bishops.

This is noteworthy as yesterday, against Alekseev, the Englishman was on the winning side with the bishop pair against a rook!

Ivanchuk played the Caro-Kann, and Nepomniachtchi ventured the controversial 3.f3 - a line with which he has recently been successful. Vassily was ready and reacted by rapidly opening the centre with ...c5, thus accepting an isolated pawn, but safe in the knowledge that White also had weaknesses. Black's development was always the more harmonious and he converted his advantage in a pseudo-ending where both sides had queen and knight.

In the other game, Alekseev tried to keep his nominal pull alive, but Dominguez defended solidly before inducing the drawish exchange of all the queenside pawns.

So no losses in the first half for Dominguez, but no wins either!

Short has bounced back from his first round loss by winning two in a row. He now moves ahead of Dominguez who has drawn all five games so far. 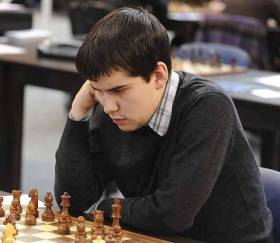