Historically Vladimir Kramnik has been the most successful player at the Melody Amber (with 4 outright victories and two shared) just ahead of Vishwanathan Anand (with 4 outright and one shared). The previous two editions were won by Aronian, but the very first Melody Amber tournament in 1992 was won by Vassily Ivanchuk. Can 'Chuky' win his second title 18 years later?

Anyway so far, so good for him as he is in the lead but it's still early days of course!

After three draws in the first session, Monday's Blindfold games finished in the late afternoon with three Black wins!

The winners were Carlsen, who is now well in his stride, Aronian, after a poor Sunday and finally Ivanchuk who thus took the overall lead after his win over Karjakin.

The middle of the table battle between Gelfand and Grischuk led to two draws, so the players stay together on 50%.

Carlsen and Aronian were again victorious and with 2/2 today they both gained several places in the table.

After two rounds, the Ukrainian pair were ahead but now Ponomariov has been caught by the big guns i.e. a resurgent Carlsen and a steady Kramnik.

So this leaves Vassily Ivanchuk alone on 4.5/6, but there are still 16 more games to play before one gets too carried away with predictions! 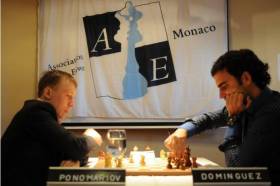