The last games in the quad final were hard-fought draws:

So the final points tally in the Quad Final is as follows:

The winner of the play-off game tomorrow takes an additional $5,000 dollars plus the title of 2010 US Champion.

In the Challengers swiss Shabalov came out on top with a last round win, and he thus takes the fifth prize.

Stripunsky has to settle for sixth.

The places and prizes were as follows:

The Final standings in the Challengers Swiss:

Shabalov had a storming finish to overtake the field in the challengers event and earn himself ten thousand dollars. 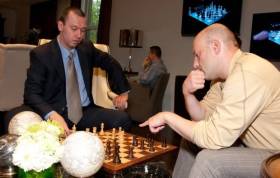