Karjakin's win came at the expense of Arkadij Naiditsch. The top seed advanced his kingside pawns against the Berlin defence, thus cramping Black's minor pieces, so the German responded by sacrificing a piece for interesting counterplay. However it turned out that he didn't have enough compensation as Karjakin had time to organise some favourable tactics. White then broke through in the centre whilst running away with his king.

Jakovenko avoided the exchange of queens and kept up pressure on the light-squares against Jobava's Tartakower defence in the Queen's Gambit. The Russian's bishop was stronger than the Georgian's knight as there was play on both flanks with Black's king in the firing line.

A good start by Karjakin who already has enough rating points in the bag to move into the World's top ten. 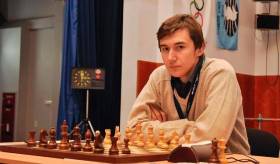 Moving up in the world. @ chess-press.com

Three of the four leaders are Russians, a good start for them.

Everyone has got off the mark and four players lead, each having a win and a draw.