The second set of games will be played tomorrow (on the 4th of December) but after the first leg the situation is as follows.

Gelfand-Jakovenko was a fairly short draw. White had the bishop pair but in compensation Black was able to weaken White's structure. Gelfand offered a draw obviously not being that happy with his position. 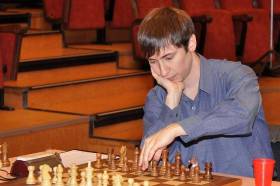 Karjakin also obtained the two bishops, but in this case was able to grind away and eventually obtained a superior rook ending. Fine technique enabled him to convert his advantage.

Against Malakhov's Chebanenko Slav, Svidler opened the centre with attacking intentions, but it was Black's counter-attack that soon settled the game.

The remaining game was drawn but, not for the first time in this World Cup, Ponomariov missed winning chances. Gashimov has had some shaky positions with Black in Khanty Mansiysk, but yet again got out of jail for free! See what you think...

Gashimov is loyal to his pet opening the Modern Benoni. Some may consider the resulting assymetric structures to be 'risky' but the young Azeri is not afraid to employ it at the highest level.

A daring pawn sacrifice to expose Black's queen and obtain access to the d4-square.

Loosening Black's grip on the kingside, but at the risk of a certain self-weakening!

It seems such a shame to give away the b-pawn so lightly. Indeed Gashimov should have given a piece with 27...♗xg4! 28.f3 ♗xf3 29.♗xf3 ♕d7 He has three pawns and a certain solidity and the safer king. This looks like adequate compensation especially as White's pieces now lack bite.

Here 31.f3! (again this move!) 31...♘g5 32.e4 consolidates White's structure and, as Black is left with various weaknesses, Ponomariov could have thus maintained the advantage.

This seems to lead to equality. 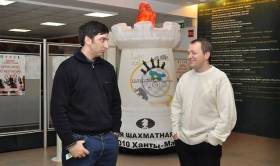 For further information go to the official site