Karjakin came out top after a tough final against Jakovenko who blundered in their sudden-death blitz decider. Here is a summary of what took place in the 'Pivdenny' (the main sponsor, an important bank) rapid.

The players and their official world ranking:

Rapid and Blitz games are not quite the same as classical chess, but the higher 'classically rated' players tended to still come out on top. This was the case in the top half of the draw in the first round, with Shirov having the toughest match only overcoming Bacrot in their Armaggedon Blitz decider.

First round: Top half

Note however that the eventual winner Sergei Karjakin also had his work cut out against Drozdovskij.

First Round: Bottom half

Gashimov had his work cut out to beat Tregubov but the big surprise of the first round was Gurevich's victory over Ivanchuk. He was the only sub-2700 survivor after the first round.

Remember that Ivanchuk didn't lose a single game during the whole of the Melody Amber rapid and blindfold games earlier this year.

Grischuk won in the rapids, Karjakin on the other hand won (not for the last time!) in the Armaggedon blitz.

In the Final, four rapid games were played, all of which were drawn as were two blitz games which led to the Armaggedon Blitz game (where Black has draw odds) which Karjakin won after a blunder by Jakovenko in a drawish endgame.

You can find additional information (in Russian!) on the official tournament site. 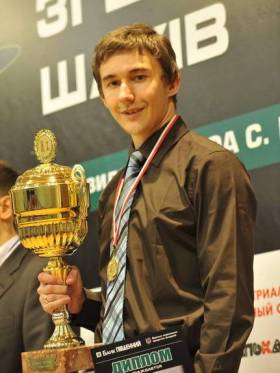