The Gulf states have become more present in the chess world in recent years. The first notable venture was the Dubai Olympiad in 1986, but since then serious training programs have led to a general improvement in the strength throughout the region. Strong open tournaments in Dubai and Abu Dhabi give the local players a chance to compete against visiting GMs.

Titled players in the region:

Qatar's world ranking is rather meaningless as they have three GMs (one of them being female Zhu Chen), but lack a sufficient number of active Elo-rated players for their country to have an appropriately high-ranking.

In the Ramadan Masters Open in Abu Dhabi (26 players in a 9 Round Swiss) the favourite Anton Korobov took clear first place with 6.5/9. Another success for this young Ukrainian who is definitely making a name for himself at the moment. How long will it be before the Ukraine can boast yet another 2700 player?

There were ten grandmasters, and a nice mix of nationalities, present in this classical time limit open (90 minutes plus an increment of 30 seconds for all moves, is slightly faster than most but still qualifies for this category).

Note the presence of the Iranian (Mohsen Sharbaf) and United Arab Emirates (Jasem Alhuwar) FMs getting up amongst the big stars. 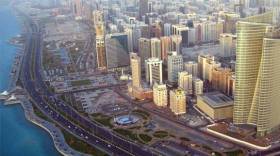 One of the world's fastest growing cities.

Abu Dhabi is now well known as a major sporting venue as well as one of the most dynamic cities in the Arab world.

This Persian Gulf city has grown dramatically in recent years despite being on the edge of a desert.