Ruslan Ponomariov had to face an ambitious rival today as Mamedyarov lashed out with an early g2-g4 in the Queen's Gambit. A wild attempt to destabilize the leader, especially as White then happily jettisoned this pawn for vague attacking chances. Ponomariov's defence stayed solid and he steered the game into an opposite bishop scenario where he wasn't worse. 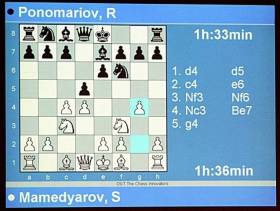 Le Quang Liem had a typical isolated queen's pawn against Leko, but in pressing on the queenside sacrificed a pawn but never recovered it. He then spent the next ninety-odd moves defending! However, despite Leko's best efforts, as all the remaining pawns were on one flank (with the unfavourable rook and bishop each) one always felt that a draw was the most likely result. 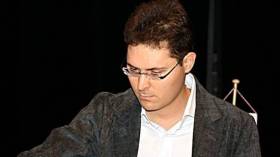 119 moves but only a draw @ official site

Here is a summary of the penultimate round.

Kramnik took some risks by playing a Pirc and then by sacrificing a pawn in order to seek complications. He induced Naiditsch to walk his king away from trouble, but although he maintained the initiative for some time his offer of a piece was perhaps a little optimistic as the German defended soundly and diffused the attack.

So Naiditsch's win has enabled him to catch Kramnik in the standings with one round remaining.

For more information (and further photos!) see the Official site