The US Women's and Junior championships took place from the 9th to the 20th of July.

The particularity of the 2010 U.S. Women's Championship is the $65,000 prize fund, the largest in the history of the tournament, and definitely one to attract the top women. The impressive breakdown is as follows:

The previous two editions were won by Anna Zatonskih (Elo 2470) ahead of Irina Krush (Elo 2476). Now Krush has gone one place better with a remarkable 8/9 and a 2600 performance!

It's noticeable that the US ratings are slightly inflated compared to international ones.

A closed event with good (by most people's standards) prizes for ten up-and-coming US stars of the future.

It turned out to be a much more even event than the Women's championship.

The cash prizes were as follows, plus a laptop computer!:

This year he was close but lost the last round. Then Parker Zhao had chances but after failing to finish off his last round opponent (from a winning endgame?) had to go into a tie-break where he lost to Sam Shankland who then went on to beat Ray Robson with the Black pieces.

So the new US Junior Champion is Sam Shankland. 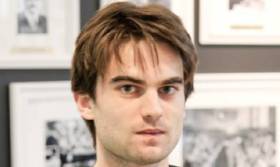