Somebody recently asked me why there were no english players in Khanty Mansiysk. The start of the London tournament (before the World Cup has finished) explains the main reason why, as the four most proficient players from Britain will be playing on home soil. So that means that Nigel Short, Michael Adams, Luke McShane and David Howell will make up the English contingent.

As Nigel Short has shown good form of late and Michael Adams has had mixed fortunes, these two are similarly rated, with Short staying slightly ahead, so there will be a certain interest from neutral observers on the issue of who is the nation's number one.

Despite limited activity of late, due to his studies, Luke McShane is undoubtedly England's third strongest player and youthful David Howell is the up-and-coming star who will need to be at his best this coming week.

The opposition will be fierce, first-and-foremost Magnus Carlsen who has recently won Nanjing and the World Blitz Championships in Moscow.

Vladimir Kramnik must have happy memories of London as it was here a decade ago that he de-throned Gary Kasparov. Since then his results have been steady rather than spectacular but he did win the Tal Memorial last month in Moscow, so is anything but a spent force!

US 'Bulletman' (Bullet is one-minute chess) Hikaru Nakamura finished ahead of the world's best in the rapid and Blitz spectacular in Cap d'Agde last year and has just beaten Carlsen 3-1 at Blitz in Oslo.

Ni Hua is one of a batch of young Chinese wizards who are making steady progress in the world rankings.

This is how he beat me a couple of years ago.

In the following position I felt that everything was under control until my opponent hit me with... 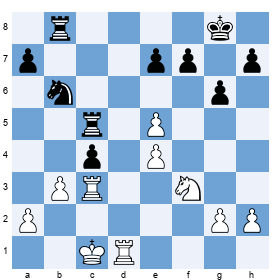 A shattering blow. All roads now lead to trouble.

White is a rook up and has a free tempo but there is no satisfactory defence.

No better are the alternatives:

The endgame is grim for White.

Here are some further details about these eight players

Here are the virtual ratings and rankings of the world's top five before this event gets underway.

First of all one notices that these players are all very close rated and secondly that Carlsen and Kramnik have both gone up a place.

The official site will have other facts and figures.