In Round 6 there were two Catalans and in neither of them Black was really troubled. Ponomariov was able to generate enough counterplay against Leko, whereas Kramnik made a positional queen sacrifice to obtain a fortress.

The only decisive result occurred in surprising circumstances. Naiditsch's opening was a shade passive enabling Mamedyarov to create some pressure. The German had however solved most of his problems when on the 39th move Mamedyarov just seemed to lose the plot.

Presumably time trouble was to blame.

Naiditsch's win takes him above Peter Leko, whereas Mamedyarov drops back to fifty percent.

No wins so far for Leko, but there are still four rounds remaining, so things can still change radically. 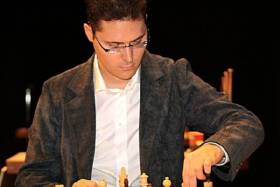 The photos used here are by Georgios Souleidis from the tournament site. For more information (and further photos!) see the Official site