The main feature of the event was a 9 round swiss tournament with an experimental time limit of 75 minutes per player. The fact that the tournament was not-rated, may have encouraged some to come and enjoy themsleves, or it may have been good prizes (4000 euros for the winner with a minimum total prize fund of 15000 euros) or generous conditions that induced large numbers of Europeans to cross the Mediterranean.

Apart from the delights of Marrakech which to Europeans has an exotic feel, here are the prizes that got so many interested:

Plus a variety of handy special prizes that also boosted the prize fund to beyond the advertised 15k euros.

In Africa there aren't many open tournaments, but in Marrakech the local organizing team certainly didn't do things by halves! For instance the event took place in an air conditioned five star hotel where many of the titled players were invited to stay. The fact that 35 grandmasters (and 23 nationalities) with an average rating of the top ten players of 2627, demonstrates that many were tempted.

The rate of play led to massive time scrambles, which meant that in some games towards the end all hell broke loose!!

The atmosphere was convivial and the organisation was excellent, due to a large number of people helping out who normally work for the main sponsor CALLSON which has a dedicated chess player at the helm Larbi Houari. 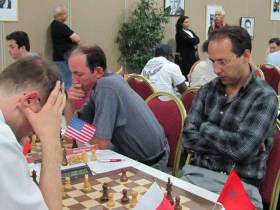 The event finished with a simultaneous display from the strongest female chess player of all time (Judit Polgar, if you didn't know!) who played against 20 women for the promotion of women's chess in Morocco, a magic moment for them!

The eventual winner in the open was the tough fighter Andrei Shchekachev who is used to the rough and tumble of quicker time limits from his longtime residence in the Paris area.

Georg Meier the 'cool, calm and collected' German was second.

Here are the final standings for the first 20 players:

Note the excellent result by local junior player Adel Choukri up amongst the big guys.

One of the best results of Andrei Schekachev's career