For those unfamiliar with the terminology, 'Rapid chess games' involve having limited clock time for the whole, here 25 minutes (plus 10" incremental time). In practise there is plenty of time for the players to structure their game properly in rapid-play and the quality of the games is comparable to that of 'Classical' chess, except perhaps that time trouble is more severe and prepared surprises in the opening can be difficult to cope with!

In contrast in 'Blitz' chess the players usually have only five minutes or less, and have to rely on instinct and quick reactions throughout.

Blindfold chess is rarely played at a high level, but adds another twist i.e. lack of sight of the board. Even with limited time and only a mental picture of the board the games are mostly of good quality, but every now and again a player will make a surprising 'oversight'.

An entertaining tournament in prospect! 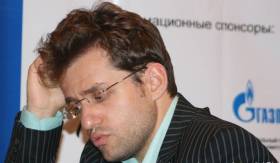 The tournament is sponsored by the Dutch (billionnaire) Mecène and World Correspondance chess champion, Joop van Oosterom. The tournament was named after his daughter.

The playing schedule of the 19th Amber Blindfold and Rapid tournaments are as follows. The results of each discipline are recorded separately but the table of overall results is also published. It may come as a surprise to the casual observer that certain players are strong at one type of chess and relatively weak in another.

The tournament is officially organized by the Max Euwe (Monaco) Association and the total prize-fund comes to € 216,000.

The rate of play will be 25 minutes per game (per player). However there will be in addition, extra time added with every move played: in the blindfold games 20 seconds, and with every move made in the rapid games 10 seconds is added.

On most days, the first session starts at 14.30 hrs and the final session finishes around 20.00 hrs. The final round on March 25 starts a couple of hours earlier.