Korchnoi, who is still very active in the chess world, beat Spassky in the first game and made a draw in the second. I'm not sure when they first played, but I believe that they were both present in 'Leningrad' during the Second World War.

More on this match after Christmas especially if any of the games are particularly interesting.

At the end of the year there are a few reasonably strong open tournament but the next premier event will be Wijk aan Zee (sponsored by Corus in mid-January). 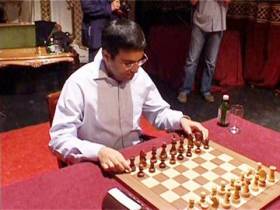 The world champion Viswanathan Anand will be second seed behind Magnus Carlsen in next year's Corus.
© Europe Echecs

As it comes closer we'll be delving into the ins and outs of the planned World Championship match between Anand and Topalov in Bulgaria. The contract has been signed, the hands have been shaken and...let's hope there are no late hitches! 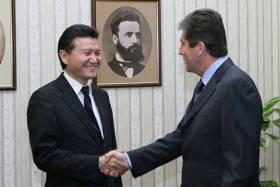 It's all agreed between the Fide president Kirsan Ilyumzhinov and Bulgarian President Georgi Parvanov.
© fide

If you hadn't noticed there is a new endgame video available.

Otherwise we'll be back with lots of news, games and further videos in about a week after taking a break over Christmas.