On the top three boards there were 'almost' some surprises, with the top two seeds being in some danger. Kamsky went astray in some complications and had to fight like a dog to keep himself afloat.

Nakamura was worse and even had to defend an endgame a pawn down.

So after seven rounds the rankings were as follows:

So in the next round (eighth for the swiss) the pairings will be as follows:

Naturally the top group of four will be playing amongst themselves, that is against opponents they have already met in the earlier phase.

However for the lower twenty participants, normal swiss rules apply and they won't be paired against the same players as earlier.

I must admit I was caught by surprise by this system, but have noticed that the Americans like to experiment with different formula for important events.

Presumably, in the 'quad' event those players who receive two whites out of three have the best chance?

Today is a rest day and the next games will take place on Saturday the 22nd of May.

Everything will be decided over the next few days.

St.Louis seems to be investing heavily in chess and their efforts will be boosted by the fact that Nakamura has just moved to the city. The new centre of chess in the USA? 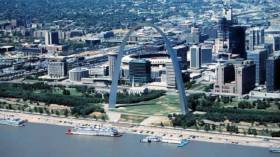 At the moment, chess in the US means St. Louis.