Here's the game from yesterday which led to Nepomnichtchi leap-frogging Jobava into the lead.

White lends support to his centre, but at the risk of weakening himself along the a7-g1 diagonal.

An interesting sideline which Jobava employed in his win over Timofeev in round 6. 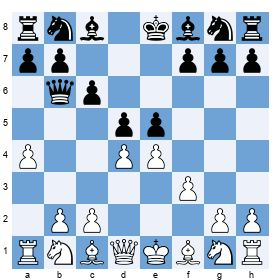 We are already out of known theory after move four!

Jobava aims to destabilize White's centre and seeks rapid development. An understandable approach as White has relied uniquely on pawn moves up to now.

Inconsistent in my opinion. 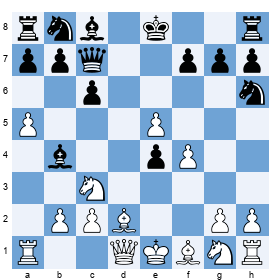 The e4-pawn is likely to fall (♘xe4 is threatened, and ...♗xc3 would badly weaken Black's dark-squares) so Jobava aims to at least gain some time.

This doesn't really mix matters as intended. So perhaps 9...♗g4 10.♗e2 ♗f5! should have been tried, as White then wouldn't have such an easy time to develop harmoniously.

White has more space and his development proves to be easier.

Re-establishing material equality. However White's central majority will probably give him a pull in the middlegame (see later for the damage these pawns actually cause!), so Black has to be careful where he places his pieces. Blockading the f5 and e6 squares is essential to stop White rolling forwards.

Black's knights are ineffective and White's grip on the right-hand side is starting to tell.

Nepomniachtchi is fully mobilized and threatening to expand. In contrast, Jobava's forces are somewhat discoordinated and he lacks counterplay, so he now provokes complications to at least distract his opponent.

A sharpening of the struggle should suit White who overall has the better pieces. 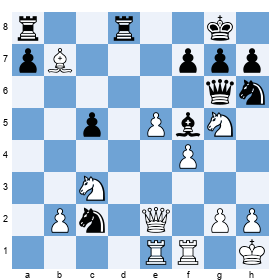 A strong move, but not the only way as the alternative line 24.♘xf7! ♘xf7 25.f5 also looks crushing.

A back rank trick that only delays the inevitable.

The f-pawn now readies itself for the decisive blow.

In today's round on board two Rauf Mamedov pushed Jobava all the way, but the Georgian managed to draw the queen ending two pawns down.

As to any thoughts of finishing in the top 22, several early draws suggest that a number of players already have their qualification for the World Cup in mind.

I estimate that 7.5 will be necessary to get into a play-off, but 8 may be required to ensure automatic qulaification.

In the women's tournament a complicated struggle in Viktorija Cmilyte-Anna Muzychuk went on late into the evening, which the leader eventually won.

Pia Cramling's victory over Stefanova puts the Swede in contention for the title going into the last round, especially as she will play Cmilyte in tomorrow's showdown.

Marie Sebag of France and Monika Socko of Poland both won, giving them sporting chances of finishing on the podium, their meeting tomorrow will be decisive.

In the ladies event 7.5 points should be enough for automatic qualification. 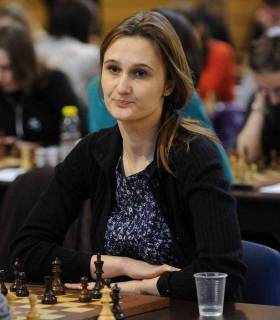