Apart from the title and prize-money, the players will also be aiming to finish in the top 22 which is synonymous with qualification for the next World Cup, an even more lucrative tournament.

This may induce some players to play cautiously to avoid dropping out of the top 22 which may well occur with any late unfortunate losses.

Baadur Jobava would probably prefer to remember his eighth round game where he won with an excellent technical display against top seed Zoltan Almasi from Hungary.

The Petrosian System where White invests a tempo to avoid ...Bb4.

White's slow build-up is met logically with a vigorous response.

It's possible to recapture with the bishop in order to keep the pawn structure as solid as possible i.e. 9...♗xd5 when the critical reaction would be 10.e4 ♗b7 11.d5!? exd5 12.exd5 ♗d6! (it's too dangerous to snatch the pawn as Black would have problems along the central files with his retarded development) 13.0-0-0 0-0 14.♗b5 with complicated play, Pert,R-Kjartansson, Hastings 2005.

Black has an isolated central pawn, but can hope for active piece play in return. 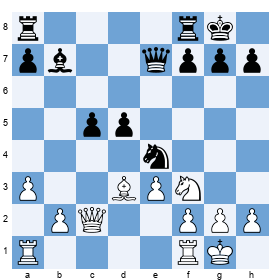 So we have hanging pawns after all! Jobava decides to break these up forthwith before black can support them with his heavy pieces.

Instead the anti-positional 16...c4? 17.♗xe4 ♕xe4 18.♕xe4 dxe4 19.♘d4 would give Black a miserable endgame as the centralized knight cannot be shifted.

For his pawn White has excellent deployment. There is little risk in this strategy as Black is unlikely to ever be in a position to exploit his extra pawn, indeed Jobava's pawn sacrifice turns out to be a good practical way of maintaining winning chances deep into the game.

Opening a second front and not falling for the standard trap 22.♕xb7?? ♖c1+!

This ensures that Black's back-rank will remain vulnerable for the time being.

Material equality has been re-established. Now the question is: who has the more vulnerable king? 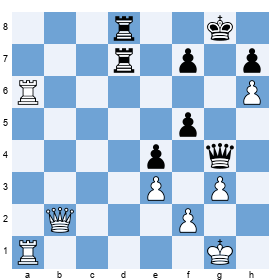 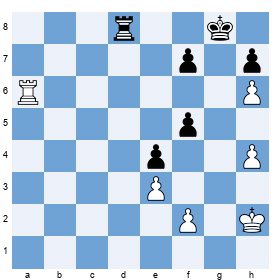 It's often the case that rook endings with all the pawns on the same flank are drawish. Here White's king cannot be prevented from marching up the board and attacking the Black pawns, whereas Black's king is restricted. So White retains winning chances.

White's pawns are not 'pretty' however Jobava is now able to show that it's the power of his king and not aesthetics that makes all the difference.

Constructing a shelter for his king.

The pawn is less important than space for his king.

The king keeps on going!

White is left with only rook's pawns, which in certain circumstances would lead to a draw, but here Black's king is cut-off from the action and so White wins. 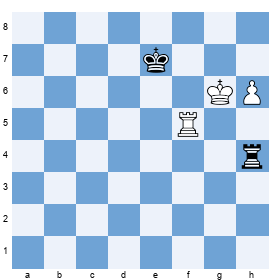 Cmilyte's win takes her to 7.5, whilst behind her are three players on 7, Antoaneta Stefanova, Anna Muzychuk and Pia Cramling, the first, third and fifth seeds respectively.

So the tournament is still far from over! 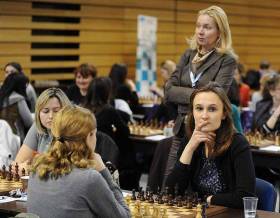 The first board battle between Socko and Cmilyte
©official site