It was quite instructive how Nepomniachtchi organised pressure against White's weak d3-pawn, and Alekseev could do nothing to prevent Black obtaining a rook endgame with an extra pawn. Nepomniachtchi's technique earned him his first win and he now joins Dominguez in equal third.

Between them they now have eleven draws and one loss. 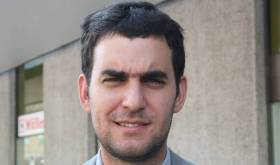 Dominguez: only draws so far

Vassily Ivanchuk managed to keep some pressure as he prevented Nigel Short from freeing his position for quite some time. However, at the end, the Englishman was poised to fully equalize with the thematic ...c5-break so Ivanchuk acquiesced to a shared point.

Alekseev his having a rough time as he has already lost three games.

Ivanchuk stays a point ahead of Short who will perhaps need to win twice in order to catch the Ukrainian.