Sergey Rublevsky is having a tough time of late. Today for instance, he became confused against Nikita Vitiugov whilst still in the opening, and got into a fatal tangle and had to resign on move 23.

Confidence is so important and Rublevsky's has clearly been shaken by a couple of White losses. 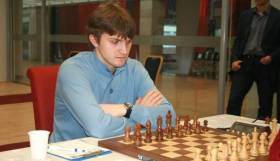 Jakovenko didn't want to take any risks and offered a draw quite early.

Naiditsch-Motylev wasn't much longer but there the prospects of opposite bishops in a simplified position didn't seem to offer good winning chances.

The other draw was a completely different story, Sergey Karjakin pressed long and hard in a rook ending and although he made progress, Onischuk defended dourly, timed his counter-attack well and held his nerve.

So Karjakin is still behind Jakovenko, but three players have caught Riazantsev and are now in equal third one point behind the leader.

Sutovsky won with his beloved Grünfeld